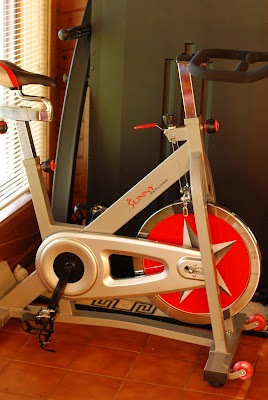 When I lost 75 lbs in college, I started exercising by running around my college's football stadium that had a track.  I would walk or jog daily and run up and down the stadium stairs.  I worked at the Police Department on campus as a work study, and I was able to use the gym for lifting weights in the building's attic.  It was a recipe for success.  I often exercised twice a day without a second thought.  I was 20.  I could do that easily because I was young and getting fit.  I lost 75 lbs in 5 months.  Yes, I was like a Biggest Loser contestant without the ranch or the prizes.

A week ago, I saw Mrs. Obama on The View.  She was talking about military families with Dr. Jill Biden.  One of the comments from Sherri Shepherd was that Mrs. Obama often works out twice a day.  Mrs. Obama responded that since her husband entered office, she isn't allowed to walk around in public, so she needs to exercise for the amount of time that she would otherwise be actively walking as a normal citizen.  This resonated with me.  Immensely!

I immediately thought back to my exercising in college.  I was always on the go.  Being in Boston, I walked from class building to class building; often one side of campus to another. Up and down stairs to get to my destination.  Walked from one side of campus to get to work. Walked back to my dorm.  Exercised for the day.  Worked a job where I often walked from dorm to job at the YMCA and back.  And would make time to workout at the Y because I had a free membership and had help from the trainers.  Walked back to my dorm or commuted on two trains and a bus to my home.  I was in a constant state of activity.  I was 20.

In 2008, when I started being most active, I had a parking spot in a Lot much farther from work.  I never took the elevator and walked up and down flights of stairs. I would often would work out at 5 a.m at home for an hour or so.  On reasonable weather days, I'd go for a walk with my coworker; even when I worked out at 5 a.m.  I strapped on a pedometer and made sure to meet 10K steps a day.

In September of 2010, I got a new parking pass for the Lot across the street.  I started taking the elevator to get to the outside from the lot.  I then started taking the elevator in my work building.  The walks during the day decreased to nothing because of winter.  I removed my pedometer from my sneaker.  My getting up at 5 a.m. stopped because everything else stopped.  I didn't have the same vim and vigor for exercise as I did when I started this journey in 2009.

Nothing changed in my home.  I still had a treadmill and spin bike.  My exercise DVDs were still intact and waiting to be played.  I'd even purchased kettlebells that have been gathering dust in my little corner of the play room.  My mat was rolled up in a corner without it being used for my beloved Yoga practice.

This past week on Wednesday, I'd had enough. Hubby has been traveling since Wednesday in the a.m. I got myself up at 5:17 a.m. and got dressed to workout.  I turned on the TV and pressed "on demand" to retrieve a video from Exercise TV.  I'd just changed to Uverse, so I now have access to tons of short exercise videos that I can use one alone or combine for a good workout.  I've been working out everyday since Wednesday, even on my birthday, May 1.  I woke up on my special day and put on a kickboxing video.  I've been doing kickboxing videos as a start to my morning for 6 days straight.  I cross train with either a spin session or walk/run session on the treadmill for at least 45 minutes of cardio.

I am very out of shape for running.  I am trying to build up my endurance.  It'll be slow, but I'll get back to running shape for the 10K I plan on running in October. I also want to build up strength in my upper body.  I have a thing for long and lean arms.

This morning as I worked out at 5:15 a.m. again, I realized that my sedentary lifestyle (a stark contrast to my college lifestyle) requires me to put in a second workout; just like Mrs. Obama.  Now, I don't want to sound like I am an obsessive compulsive who can become addicted to exercise, but "read" me out.  My life is dramatically different than when I was in college.  I drive now.  I live in a ruralesque city.  I live in the suburbs.  I have three kids that I cart around in a minivan.  I drive to the supermarket, post office, daycare, school, and work.  Once I enter my job, I sit behind a desk and work on the computer.  I sit at my desk and read briefs and make corrections.  I sit and review cases.  I sit and call or retrieve messages.  I go to meetings where I sit and communicate with others who are also seated.  I sit and eat meals and snacks at my desk.  I do a short walk to retrieve my vehicle, get the kids, go home cook, and veg out on the couch, "exhausted" from my day.

As you may empathize, that "exhaustion" is mental--NOT PHYSICAL.  I didn't do enough in my day to be exhausted.  Compared to day laborers, skilled workers and farmers, I have a sweet and easy life.  And I should be doing more activity.  I should be exercising when I put the kids to bed.  Why don't I?  Not because I am lazy, but often times it is vegging out when hubby is home.  I sit with him and talk while we watch TV or a movie.  He is gone so often (like these past 6 days that I have been working out), that I like to spend all my time with him.  I'd rather get up and workout, but I join him in the family room to sit.  I feel this sense of responsibility to be a wife and devote time to him.  I remember when I stopped being the active woman that I was in 1994 and thereafte; I started dating him and wanting to spend time with him.

Okay, now this is "blame the man" time.  Actually, when we were dating and then living together, we were quite active.  We worked out in the mornings together by walking and jogging around the cemetery in our neighborhood in Maine, and we would meet at the University's gym after work.  Often, I drove several miles after work to meet him before joining my own gym closer to work.  I would work out in the morning with him, then I would workout at the gym either at lunch or after work because I was sedentary during the work hours.  When his role at work was elevated, his exercise lessened.  Now that he travels and works so many long hours, he doesn't exercise at all.  For many years, I followed suit until I had Lootie Tootie in 2008.  I couldn't stand being sedentary anymore.  I was frazzled as a married, mid-30-year-old with 3 kids.

Going from a city girl to a rural dweller and then a mom, changed my body.  I want to get back to the body I worked so hard for in the early 90s.  I no longer want to make excuses for being this size or allowances for being a wife and mom.  I do use Mrs. Obama as a role model because she and I are in the same profession and have children.  She is a lot busier than I am with her platform and world wide travels, but we are all in the same struggle to maintain good health and moderate weight.

So, I am going to workout twice a day for at least 21 days and see if I form a habit.  Now, I don't think I will be doing the insane, intense routines as in the Biggest Loser, but I will do my weight training and get back to Yoga in the evenings after having completed cardio in the mornings.  I am going to strap on the pedometer (once I find it) to ensure I get 10K steps a day.  And I will take the stairs and walk as often as I can; even forcing myself to take a few breaks to sneak it in during the day.  Today, I made plans to walk with my coworker at 11 a.m. CT, and I am looking forward to getting some fresh air.  I hope to do Yoga tonight for my arms, legs, and flexibility.  I am excited.

How active are you during the day?  What "obstacles" are keeping you from being more active?
Posted by Unknown at 10:02 AM

After years of blogging about my crafts, photography, and parenting, I've decided to blog about my journey to fitness, healthy living, and hopefully, the added benefit of weight loss that they bring.

All photography is mine, unless otherwise noted under the image. If you like what you see and would like to use the image or post, please ask beforehand. I am prone to say "yes"; especially when the purpose is for promoting wellness.

Do leave comments. I love them. I want to know that you are out there reading. And if you have a blog, I want to follow you on your journey.

Thanks for stopping by.